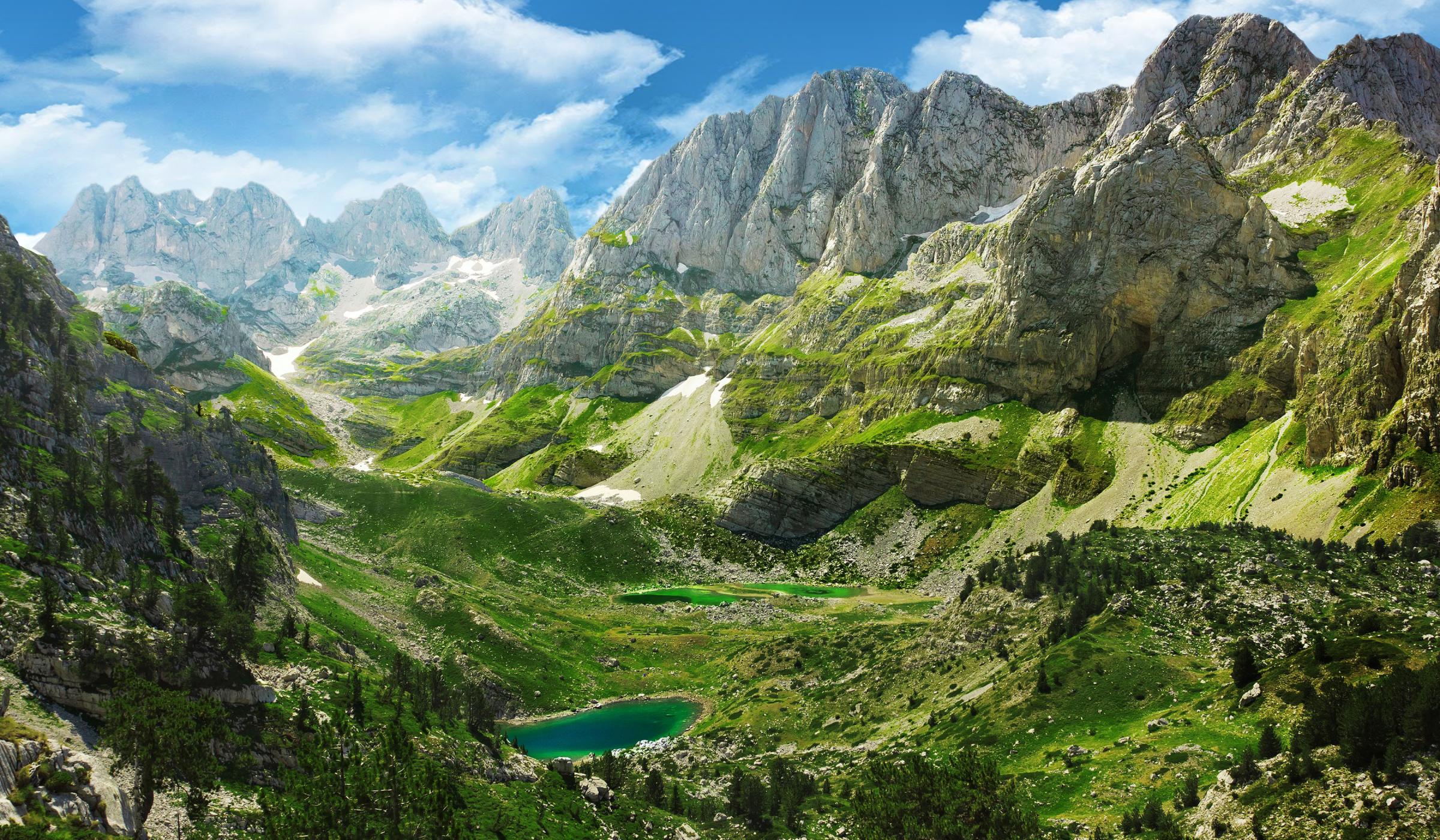 [vc_row][vc_column][vc_custom_heading text=”Walking in Albania’s ‘Accursed Mountains’” font_container=”tag:h2|text_align:left|color:%23207048″ google_fonts=”font_family:Satisfy%3Aregular|font_style:400%20regular%3A400%3Anormal”][vc_empty_space][vc_column_text]Like many minor roads in Albania, the route from the northern city of Shkodër to the nearby mountains is not tarmacked, and as our van bumps along, it contributes to the clouds of white dust that settle on everything in sight. We pass countless old Mercedes, several horses and carts, and bicycling old men wearing brimmed hats and shades. Many of the roadside buildings are half-built or crumbling, but scruffy cafes and petrol stations are doing good business, alongside houses smartly painted in bright colours: lime green, peach, lavender and aquamarine.

Then we reach a handful of low-lying concrete domes. During the communist regime, which collapsed in 1990, it’s estimated that more than 500,000 of these machine gun bunkers were constructed in Albania. “Our dictator built them so that people would always have the feeling that other states are going to attack us, and not think about the problems in this country,” says our guide, Aleks.

That era of extreme isolation has gone, but Albania remains a closed book to many: until very recently Albanians needed visas to travel to most of Europe, and the country has had relatively few foreign visitors. The group squeezed into the 10-seater minibus includes a retired banker, a TV executive and a supply teacher, and our ages vary by more than 40 years. What unites us is a desire to learn more about this country.

I could also say it was a love of hiking (we’re here on a trekking tour – a new itinerary from Walks Worldwide), although my interest in mountain walking has hitherto been purely theoretical. I’m relying on raw enthusiasm to see me through five full days on rubble-strewn paths under a hot September sun.

Glowing red in the evening haze from the castle in Shkodër the previous night, the “Accursed Mountains” (part of the Dinaric Alps) seemed almost lunar. During our walking we find much to justify their name. Blasted tree skeletons and flailing roots attest to the violence of winter storms. We scrabble and slip over bleached white rocks, brush past sun-scorched ferns, and even witness a small forest fire. But, above all, the mountains are tranquil. Crickets croak in hidden meadows, lizards skit beneath stones, and butterflies dance between rosehips and blackberry bushes. We refill our water bottles from cold springs, and take a shivery swim in a waterfall’s blue plunge pool. The silence of a shady beech canopy is broken only by the crunch and clatter of our steps and sticks.

We start on the first day with a steep descent and the intensity rarely lets up. From below, the mountains look impossible to climb, and ascending their zigzag paths requires a determined, sustained effort. I breathe heavily, and when I pause, blood thumps in my neck. But as we near the summits (the highest peak in the Dinaric Alps is at 2,694m) and breezes cool our sweaty faces, it’s exhilarating to be so high up.

We walk through villages, valleys and high passes, stopping at guesthouses to rest tired feet and eat dinner outside in the cool evening air. Our diet is simple and often repetitive: every day, our lunch features a tomato, a cucumber and a strong, feta-like cheese that can be almost unpalatably pungent. But baked wild trout, a natural yoghurt drink, and plum raki are a different matter. Clean streams run straight off the mountainside, keeping beer cans cold.

At the village of Thethi we see a “blood feud” tower, where the targets of clan rivalries could take refuge. It hasn’t been used for about 200 years, but many communities still live and work in the mountains. On one occasion we meet a man pushing a wheelbarrow in which is a trussed pig, headed for slaughter. He grins proudly as we take photos of the quivering animal.

Aleks tells a story about how the Accursed Mountains got their name. Two brothers went hunting and found a beautiful fairy. Asked which one she preferred, she answered: one for his bravery, the other for his good looks. The brave brother killed the handsome one and took the fairy home to their mother, who was so angry she cursed the fairy and the mountains for ever.

In Albania, not everything runs smoothly: you’re more likely to encounter a mountain fairy than a reliable bus timetable, and in just one night in the capital, Tirana, we experienced several brief powercuts. But it is partly because of this that it leaves its mark. Before going I wasn’t sure if I could hike, nor whether I would enjoy it, or get on with people who did. By the end, all of those concerns had evaporated into the mountain air.[/vc_column_text][vc_empty_space][vc_column_text]Source: The Guardian (https://www.theguardian.com/travel/albania)[/vc_column_text][/vc_column][/vc_row]