BOOK NOW
After this trip, you may be sure that you will not only see Albania, but you will know it intimately! You will meet locals, explore the local food, learn the history and understand the religion in the “Land of the Eagle” where guest’s hospitality is an obligation and a matter of honor. 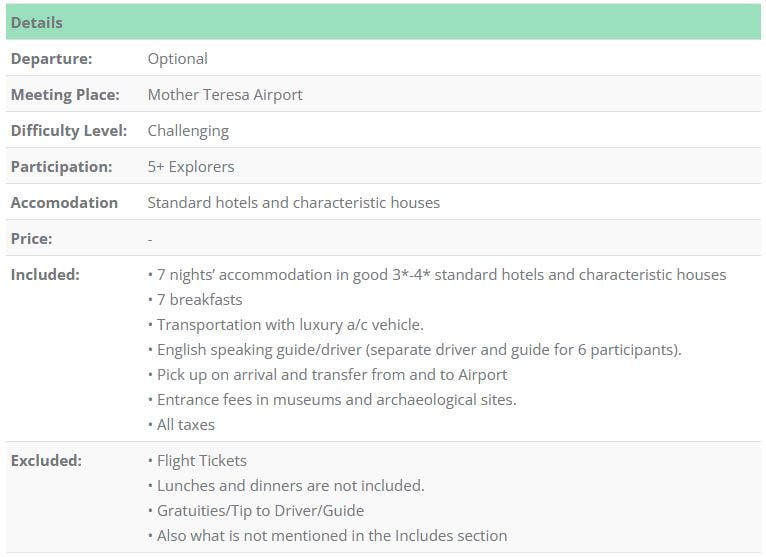 We will meet you at the Tirana International Airport “Nënë Tereza” and escort you to your hotel in Tirana.
Overnight in Tirana

Our day will start in Tirana’s main square discovering the history and beauties of this town which was transformed from a big village into a modern capital in the first half of the XX century. We will visit the Et’hem bey mosque, the museum of National History, we’ll walk in the main boulevard ‘Martyrs of the Nation’, see the Pyramid of Tirana, the ‘Blloku’ luxury area etc.
In the second half of the day we will visit Kruja, the city of resistance of the Albanians under the leadership of our national hero Gjergj Kastrioti Skanderbeg during the XV century. We will have an introduction to the traditional Albanian culinary delights while having lunch in a traditional restaurant and will see the most complete and interesting Old Bazaar, where the locals produce and sell their authentic products.
After the visit of the castle, the Ethnographic museum, Skanderbeg Museum and the old part of the town of Kruja we will drive north towards the town of Shkodra, where we will check in our accommodation in late afternoon. In the afternoon we will explore the old part of the town.
Overnight in Shkodra

After breakfast we will visit the IV century BC castle of Rozafa (name given by the legend of Roza-fati) located on a hill overlooking the lake of Shkodra, the two rivers (Drin and Buna) and the Albanian Alps.
In the second part of the day, we drive to Durres, (the capital of Albania 1272 – 1920,) and one of the most important cities during the Roman Empire, known as Dyrrachion. We will visit the Amphitheatre built in the II century AD, where we will find a hidden gem. Afterwards we visit the Archaeological museum full of very ancient and beautiful collections.
Next visit will be at Ardenica Christian Orthodox monastery (XIII century) which is famous for its church with walls covered in colorful frescoes and wooden carved altar.
In the afternoon we will drive towards the town of Vlora where we will check in our hotel.
Overnight in Vlora

Today we will drive along the Albanian Riviera with breathtaking and exotic vews on the Ionian seaside. On the way, will drive through the forest of Llogara National Park where we will be at 1025 meters above sea level from where we can admire the whole coast line and the Greek islands in the Ionian Sea. Next we continue towards Himara where we will have a break by the sea before continuing towards our next visit, the Ali Pasha castle located in the middle of Panormi bay (know as Porto Palermo) which was build in the first decade of XIX by Ali Pasha Tepelena under the supervision of French engineers and is a rear example of French military architecture in Albania. Next visit will be at Borshi water springs. In the afternoon we will check in our hotel near the sea in Saranda.
Overnight in Saranda

During the first part of the day we will visit the Archaeological park of Butrinti, UNESCO World Heritage site since 1995. Founded in the VII century BC by the Corcyrians, it became one of the most important Greek colonies in the Ionian Sea. Afterwards when the Roman Empire conquered, Butrint was turned into a big and very important city for Rome. Nowadays it is the best preserved archaeological site in Albania.
After a short break by the sea in the white beach of Ksamil we will continue east towards Gjirokastra, UNESCO World heritage town.
On the way, we will visit the Blue Eye water springs natural park, one of the most popular natural attractions in Albania. In the afternoon we will continue towards Gjirokastra where we will check in our traditional accommodation located in the historical part of the town.
Overnight in Gjirokastra

After breakfast we will explore the old town of Gjirokastra, UNESCO World Heritage town since 2004. We will start our visit from the Ottoman fortress (XIV century) and continue with a visit at the old bazaar and the birth place of the ex-communist leader Enver Hoxha, now turned into an Ethnographic museum.
Next visit will be at Apollonia Archaeological site which started in the 7th century BC as the ancient town of Apollonia, the second largest Greek colony in Albania. Founded in the VII century BC, Apollonia became one of the most important towns in the region in the IV century BC. Nowadays it is one of the biggest archaeological parks in Albania.
In the afternoon we will drive towards Berat, UNESCO World heritage town where we will check in our traditional accommodation located in the historical part of the town.
Overnight in Berat

Our visit in Berat UNESCO World Heritage town will start from the Medieval center of the old town of Berat know for the Sunni mosque and the Helveti tekke. Next we will continue with a visit in the IV century BC fortress located on the hill overlooking the Osumi valley. The fortress is better known for the old Christian Orthodox cathedral where the Onufri Icon Gallery is located. Here we will admire some of the most beautiful and oldest icons in Albania, dating from the XIV century. Our visit in Berat will end with a pleasant visit in a local winery (Optional) where we will taste some good Albanain wine and raki which is the traditional Albanian drink.
In the second part of the day we will drive to Elbasan where we will visit the old fortress before continuing towards Tirana through a recently opened tunnel. In the afternoon we will check in Tirana.
Overnight in Tirana

After breakfast we drive you to the airport wishing you a nice flight back home.